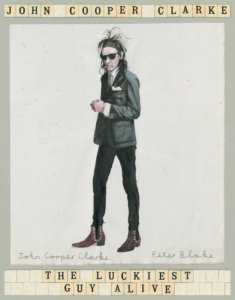 The “People’s Poet” has been active since the 1970s as poet, musician, actor, radio presenter, comedian and social critic, and is also honorary doctor at the University of Salford. On 20th June 2019, his current tour with the title “The Luckiest Guy Alive” will bring the now 70 year-old JOHN COOPER CLARKE to Berlin for the first time. In a very intimate show at Festsaal Kreuzbergthe audience will be traed to a mix of his classic poetry, new material, hilarious ponderings on modern life, good honest gags, riffs, chat, and more.